Indians do not have a sense of history. The ancient rishis did not leave a record of their scientific experiments and achievements. For them science was a philosophical pursuit, an eternal quest for truth and unravelling the mysteries of the universe, and aimed at improving the lot of mankind. (See SCIENCE INANCIENT INDIA).

If the youth of today does not have an understanding of the achievements of their ancestors, there are several reasons for this. One is that the nation was subjugated and ruled by aliens for nearly a thousand years. If the theme of the alien rule during the first six hundred and fifty years was inflicting physical cruelties, the British who ruled next for about three hundred years used a different tactic. Their objective was to keep the Indians physically and psychologically oppressed. By the time the British left in 1947, large numbers of Indians were oblivious of their ancient glory. They were convinced that they were always a backward civilization and that they were civilized by their alien rulers!

The history of India had been often a ‘made to order’ product commissioned to sub-serve the interests of those who did so. History was written to suit the religious and political interests of the rulers. The religious objective was to lower the self-esteem of the people and show India’s indigenous religion as a backward cult. The political objective was to cleave the society vertically and horizontally. It is as a part of this game plan that the ‘Aryan – Dravidian’ bogey and ‘Sanskrit is a dead language’ myth were created. (See Should WeRe-write Indian History?)

Any residual knowledge or achievements that survive were sought to be explained away as relevant only to the upper strata of the society. The caste system that plagues the nation today was in fact congealed into place during the two phases of alien rule mentioned earlier. Originally, it was merely a division of labour and social mobility permitted both upward and downward movement of people. The castes were no more different than the Anglo Saxon surnames like ‘Barber’ or ‘Carpenter’, which only connote the trades the ancestors of these people might have adopted in the past. Any hope that history written during the colonial rule would be corrected and rewritten in the post independence period to project the glories of the ancient civilization was shot down because of the political imperatives of the new rulers and their fellow travellers in the academia. Both the rulers and their fellow travellers, the ‘rootless intellectuals’ (to use Ernest Bevin’s phrase) who occupied the higher echelons of the academia failed to see the role of history as a unifying force and nation building. As a result, we are today not one nation but a loose conglomeration of states held together ironically, by a civilization which the rulers and the academia wish to airbrush. If the ‘official’ academia is unwilling to correct wrong history how do we educate posterity about the grandeur of their ancestry?

It is against this backdrop that ‘The Krishna Key’ assumes significance. The book discusses in great detail the history of the extinct Saraswati River and the civilization that shadowed its growth and decline. Thanks to all the scientific evidence that has come to light in recent decades, the politically motivated ‘Aryan - Dravidian’ theory can at last be laid to rest. (RIP Aryan Invasion / Aryan Migration Theory!) The evidence includes not only new archaeological evidence but dating historical events based on the planetary configurations described in our epics. It would be ridiculous to argue that the writers of the Ithihasas not only exhibited extraordinary skill in creating everlasting stories but went to the extent of calculating planetary configurations that predated them by thousands of years simply to include them in their works. It was not beyond the power of the rishis who created the epics to do so, but it would only be natural for them to describe the planetary positions as they were seen in their time. It is in this context, after demolishing the impugned ‘Aryan - Dravidian’ theory, the book pointed out the possibility of an ancient civilization spreading from east to west instead of west to east as always presumed. Ironically it bases its argument on the same philological logic on which the protagonists of ‘Aryan - Dravidian’ theory based theirs. If ‘Dalton’s atomic theory’ could be rescinded within forty years of its proposition, why should we also not discard the ‘Aryan - Dravidian’ theory in view of mounting evidence to the contrary? There is a lot of discussion in the book about the cryptic symbolism of numbers and various other practices of Hinduism which were originally initiated by the rishis in their scientific wisdom. It is for this wealth of detail that the book should be read by everyone interested ancient Hindu civilisations.

The novel is about the quest of a group of four scholars (a historian, an archaeologist, a marine archaeologist and a geneticist) to unlock the secrets of Krishna’s ancient kingdom of Dwaraka. The storyline is a broth of mythology, history, archaeology and theology cunningly intermingled with the current narrative that makes for compelling reading. The story of Krishna and Mahabharata is used as a backdrop for a story of murder and mystery. The cast of characters includes an intelligent, middle-aged, widower professor and a dutiful (and middle-aged), widowed woman police officer to pair him. There is a beautiful, clever, not so honest (again middle aged) spinster, research scholar and her unquestioning, criminal acolyte. There is a sharp, ruthless criminal lawyer who made his pot of gold representing the criminal underworld (imagine someone like ‘Raj Malhotra’ in the Govinda starrer, ‘Kyonki main jhut nahi bolta ’) and a gangland boss with a hoary ancestry dating all the way back to Sri Krishna. As the narrative picks up speed (it does so right in the beginning) the characters run about from Jaipur to Pune to Delhi to Jodhpur to Dwaraka to Chandigarh via Manasa Sarovar and finally to the Taj Mahal in Agra, the crooked on a murder spree and the righteous in pursuit. As in all virtuous stories, in this novel too good triumphs over evil and the culprits were captured. Giving away more details of the story would be spoiling the thrill of reading it. One can’t help recall Dan Brown’s Da Vinci Code after reading all those twists and turns, allusions to mythological events and cryptic puzzles. 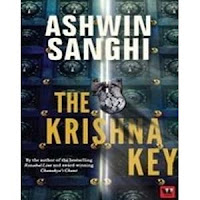 Though there are only a few errors in the book, some of them are significant and cannot be ignored. See these examples: There is a story behind Bhima’s slaying of Jarasandha. It was not about Sri Krishna's  desire to strengthen his Yadava kingdom by eliminating a potential enemy, as mentioned. (p. 187) According to the Mahabharata, five mahabalas (immensely strong warriors) were born at the same time under a single birth star. They were Bhima, Bakasura, Duryodhana, Keechaka and Jarasandha. According to a divine ordinance, the first to slay any one of the others would also slay the remaining three. Therefore for Bhima to slay Duryodhana at the end of the war according to his vow, it was necessary for him to slay any one of the others first. Yudhisthira’s first Rajasuya Yaga  was to make the kings of all those kingdoms through which the horse roamed accept his suzerainty; not as an equal. (p. 187). The raison d’ etre for performing a Rajasuya Yaga was correctly described when Yudhisthira performed it a second time after the war. In line 14, p. 189, it should be Sastra chikitsa or tantra (meaning surgery) and not Sastra karma. In the sentence ‘Some coincided, others differed’ (line 7, p 272), shouldn’t it be ‘concurred’? The Rig Vedic hymn (line 6, p. 293) should read as ‘ekam sat; viprah bahudha vadanti’ (not vidhaante). Isn’t it ‘Rahika and Saini’ and not ‘Priya and Saini’ in p. 301? Prithviraj Chouhan the last Hindu king was killed in 1192 AD and not BCE (p. 328). In line 9 page 330 the sentence should read as ‘… Indian blacksmiths had succeeded’, not ‘succeeding’. Is it necessary to repeat the story of ‘Syamantaka mani’ once told by Sri Krishna and a second time by Sir Khan? The event of Gandhari bestowing Duryodhana with vajra sareera with her fondling touch had occurred in his childhood, not before the war. Sri Krishna prevented Duryodhana’s whole body being bestowed with a vajra sareera by jeering at him for walking naked (p. 372). Sri Krishna thus ensured the upper part of his thighs remained vulnerable, to enable Bhima to hit there and so fulfil his vow which he made when Draupadi was insulted. It should be Saini and Radhika who put their hands up and not Priya and Saini (line 16-17 p. 389). The sastra that dictates temple architecture is the Aagama Sastra and not the Vaastu Sastra. (p. 402). A nerve does not supply blood. It should be a blood vessel (line 13, p. 406). Avoiding these errors would have improved an otherwise excellently researched well-written novel.

This review is part of the Book Reviews programme at Blogadda.com

'TWISTING FACTS TO SUIT THEORIES' & OTHER SELECTIONS FROM VOXINDICA