The Tale Of Two First Amendments

In a landmark judgement delivered on June 30, 1971, the US federal Supreme Court upheld the right of The New York Times (New York Times Co. v. United States) to publish articles based on the Pentagon Papers.

In 1967, Secretary of Defence, Robert McNamara commissioned the preparation of a top secret report (the Pentagon Papers) on the USA’s political and military involvement in Vietnam since the end of World War II. The report drew its material from the archives of the State Department, Defence and the CIA during the reigns of Harry Truman, Dwight D. Eisenhower, John F. Kennedy and Lyndon B. Johnson. Daniel Ellsberg, a former US Marine Corps officer and a strategic affairs analyst at RAND Corporation, was a member of the team which prepared the 7000-page report. The report made clear that all the administrations misled the American public and contrary to the government’s pronouncements, intensive bombing of North Vietnam, did not break the will of the ‘enemy’.

In the initial years, Ellsberg supported US involvement in Vietnam. But by the time the report was finalised in 1969, he came to the conclusion that there was no possibility of the USA winning the war. An estimated 500,000 American soldiers participated in the war and by the time it ended in a fiasco for the US in 1973, it consumed 58,000 lives. In view of the general concern about mounting casualties, Ellsberg felt that the contents of the report should be shared with the public. In March 1971, Ellsberg (by then working with MIT’s Center for International Studies) shared parts of the report with Neil Sheehan, a reporter of The New York Times. The paper began publishing a series of front-page articles based on the report, from June 13, 1971. Articles based on the report also appeared in The Washington Post and the Boston Globe. After the third instalment was published, the US Department of Justice obtained an order from a local court restraining the papers from continuing the series, arguing that the publication was harmful to national security. The New York Times and The Washington Post approached the federal Supreme Court against the order. In a 6-3 ruling the Supreme Court held that the government was unable to justify its claim of harm to national security, and under the protection of the First Amendment, the papers had a right to publish the articles.

The First Amendment to the US Constitution adopted in 1791 protects freedom of speech, religion and the press:

“Congress shall make no law respecting an establishment of religion, or prohibiting the free exercise thereof; or abridging the freedom of speech, or of the press; or the right of the people peaceably to assemble, and to petition the Government for a redress of grievances.”

The protective umbrella of the First Amendment stood the test of time and helped citizens and the press in freely exercising their freedom of speech. While adjudicating matters related to freedom of speech, US courts generally upheld the right, with the exceptions of libel, obscenity and sedition. For example, in Schenck v. United States (1919), the Supreme Court upheld the conviction of Socialist Party activist Charles Schenck after he urged young men in a pamphlet to dodge conscription during World War I.

While upholding the secular nature of the constitution guaranteed under the First Amendment, the courts however, generally made a distinction between religious beliefs and civic practices. In Reynolds v. United States (1878), the Supreme Court upheld a ban on polygamy. In Braunfeld v. Brown (1961) the Supreme Court upheld a Pennsylvania law requiring business establishments to close on Sundays, against the objection of orthodox Jews. In Lemon v. Kurtzman (1971) the Supreme Court struck down a Pennsylvania law that allowed the state to pay salaries of teachers in Catholic schools.

A Texas court held that Gregory Lee Johnson, a young communist broke the law by burning a flag in a protest against the Ronald Regan administration in 1984. The Supreme Court upturned the judgement and held Johnson ‘not guilty’. The US Congress responded to the ruling by passing the Flag Protection Act (1989). In United States v. Eichman (1990), the Supreme Court decreed the Flag Protection Act was unconstitutional. While the rulings were generally welcomed as a benchmark of liberal jurisprudence, Robert H Bork, former judge, Solicitor General and professor of law at Yale Law School differed. He felt that the “Court’s majority failed to see that no idea was being suppressed but a particularly offensive mode of expression.” He rejected the idea that “desecrating the flag should constitute a protected form of expression.” (Batchis, Wayne. 2016. The Right’s First Amendment. Stanford University Press.p.1) 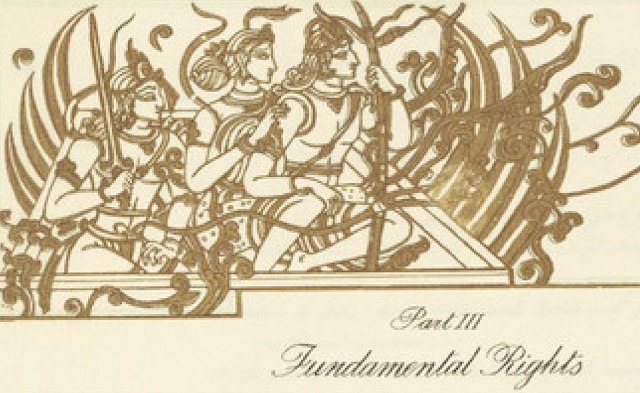 Strangely, it was both the left and the right press that angered the administration to rush in to enact the first amendment within fifteen months of adopting the Constitution. In 1949, Romesh Thapar’s left-leaning weekly Cross Roads was banned in the erstwhile state of Madras. What was the reason for the ban? The magazine criticised the policies of the central government, especially its foreign policy. The Supreme Court struck down the ban in Romesh Thapar vs The State of Madras (1950). Similarly in 1950, the government sought to censor the RSS weekly Organiser. What was the reason for the pre-censorship order? The magazine criticised the response of the central government to the refugee influx from East Pakistan. The Supreme Court struck down the censorship order in Brij Bhushan And Another vs The State Of Delhi (1950).