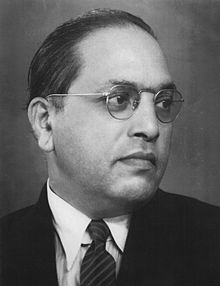 If in an open forum, had you made any of the innocuous remarks listed below, chances are you are likely to be pounced upon:

Ambedkar was the Chairman of the ‘Drafting Committee’ of the Indian Constitution; there were other members who helped him write it …

Ambedkar alone did not write the Indian Constitution …

Sometime ago I have posted the following in a WhatsApp discussion:

“The Constitution of India was not ‘written’ (as in writing a book) entirely by B. R. Ambedkar as popularly believed, nor was entirely ideated by Jawaharlal Nehru as some seem to believe. It was the collective effort of 389 of the best and the brightest minds of the time who toiled for about three years between 1946 and 1949. Nehru proposed the ‘Objectives Resolution’ and Ambedkar was the Chairman of the ‘Drafting Committee’.

While the 1935 ‘Government of India Act’ (needless to point out, of the British parliament) formed the basis of the Indian Constitution, the wise men (and women) who formed the Constituent Assembly incorporated parts of the British, Irish, French, US and other constitutions among others into it.”

Leafing through the index (some people have such weird habits) at the end of “The Makers of Indian Constitution - Myth And Reality” (Chavan, Sesharao. 2000. Bharatiya Vidya Bhavan), I stumbled upon the word plagiarism. Curious to know what ‘plagiarism’ has to do with the writing of the Indian Constitution, I turned to the relevant page. It appeared in Chapter 4, “Draft Constitution” (pp. 51-88). According to it, Sir B. N. Rau (an eminent jurist and adviser to the Constituent Assembly) prepared the draft constitution comprising 240 clauses and 13 schedules. Sir B. N. travelled to Great Britain, Ireland, United States of America and Canada to study their Constitutions before preparing his draft. He had discussions with President Harry Truman of the USA, Prime Minister D’ Valere of Ireland and many other Constitutional experts. It was his draft that was put before the Constituent Assembly to suggest suitable modifications to the “Draft Constitution”. The Constituent Assembly appointed the following members to the ‘Drafting Committee’ at its sitting on August 29, 1947:

The Committee elected Dr. B. R. Ambedkar as its Chairman in its first meeting on August 30. From then on, it met on forty four days till February 13 1948 and the first draft of the Constitution was presented to the President the next day, February 14 1948. The draft was put up for the public to study for eight months. On November 4 1948 it was formally presented to the Constituent Assembly for clause by clause discussion, debate and amendments.

While introducing the Draft Constitution to the Constituent Assembly Ambedkar acknowledged the role of various Committees whose reports formed the basis for drafting articles:

He then explained the rationale for using Government of India Act of 1935 as the basis:

There you have it from the horse’s mouth. Ambedkar went on to say:

Ambedkar explained that while the Constitutions of other countries were used as the basis, appropriate modifications were made to suit the Indian context:

“The charge of producing a blind copy of the Constitutions of other countries is based, I am sure, on an inadequate study of the Constitution. I have shown what is new in the Draft Constitution and I am sure that those who have studied other Constitutions and who are prepared to consider the matter dispassionately will agree that the Drafting Committee in performing its duty has not been guilty of such blind and slavish imitation as it is represented to be.”

He explained why, in writing the Constitution, it was not necessary ‘to reinvent the wheel all over again’:

“As to the accusation that the Draft Constitution has produced a good part of the provisions of the Government of India Act 1935, I make no apologies. There is nothing to be ashamed of in borrowing. It involves no plagiarism. No body holds any patent rights in the fundamental areas of a Constitution.”
Posted by VOXINDICA at 00:32:00